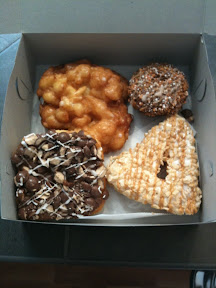 Thanks Joanna for putting the donut crave in my head. Anyway, Psycho Donut is this little donut shop a couple blocks from our house and I can usually ignore my cravings but hey, I'm pregnant AND started holiday vacation today - so why not!!
The shop is complete with a padded cell and people who work the counter either wear doctors or nurses outfits. After many (small) rallys and some press coverage, Psycho came to some agreements with a group representing mentally challenged peoples. A lot of buzz for our little town!
Anyway the donuts are out of this world unique with the names to match ( like, Bipolar, a cake donut topped half with peanuts and the other half coconut). I think the shop has similar vibe as Voo Doo Donut in Portland - but I have to admit I like Psycho's base better, though not as "colorful" as Voo Doo's.
Pictured is 'apricotology', an apricot glazed donut shaped kinda like a bear claw, also malted milk balls and chocolate on a glazed, 'mellow peanut' melted marshmellow with rice krispies and light dash of peanut butter and 'clumsy crunch' a chocolate cake with some type of heath crunch topping. They were out of my favorite which is a glazed base topped with lemonade, pretzels and little dust of chili powder. Enough donut to make you go crazy!

- Posted using BlogPress from my iPhone
Posted by Kari at 5:34 PM