I do love her laugh!
- Posted from my iPhone

Ayla's Grammy bought a spider costume for her this Halloween, unfortunately it arrived after she had left for daycare Halloween party. We dressed her as a leopard kitty (previous pics). So we decided to have her wear the spider on Sunday (actual Halloween). I think the costume arriving late may have been a blessing in disguise because it was so big and unwieldy on her that she only wore it for about 1 hour at our neighbor's party. It's definitely a costume for a baby who can already stand - we'll definitely get better use out of it next year!! 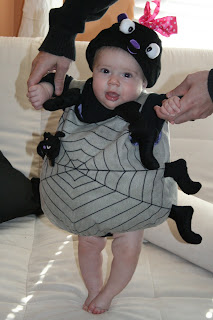 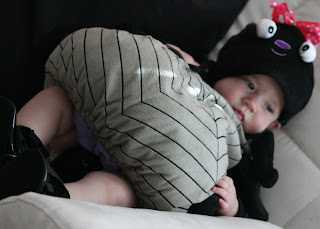 One other thing of note is that it's sooo obvious that Ayla is Bob's daughter and sometimes when I put her face right next to mine the only resemblence is the color of our eyes. While going through her spider pics I noticed a recurring face that  seemed familiar and at first I even thought of my brother Kenny, but then I realized I had seen it before in my baby pictures. Bob has said that we have the same facial expressions LOL Autumn is in the air

- Posted from my iPhone

Have you seen a cuter face?