We made this soupy-chowder for the Super Bowl Sunday. It was super-easy to make AND super-yummy :-) 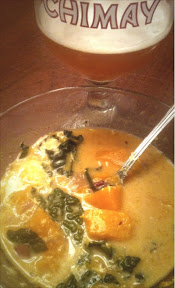 As you can see in picture, we drank Chimay with the chowder. It went really well with the Chimay beer (but honestly... what doesn't)!

Cooking time 4-6 hours on low. I used Turkey bacon as a substitute for normal bacon rather than omitting altogether so a smoky-base flavor would still come out. Added bonus, we found another use for kale and butternuts rather than our usual recipes!

I barely remembered to snap this picture - it was my second helping! What you also cannot see is that just before serving you top it with grated parmesan cheese.

We also blended some leftovers and spooned over quinoa for dinners for Ayla that week.

Recipe from The Slow Cooker Revolution

- Posted using BlogPress from my iPad

Email ThisBlogThis!Share to TwitterShare to FacebookShare to Pinterest
Labels: crockpot