Oh what a decade! 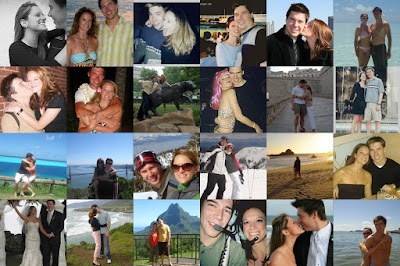 Taking the time to reflect back on the last decade, wow, so much has happened. Well, of course it did, it was 10 years! But really thinking about it kind of blows your mind... for instance January 1, 2000 Bob and I did not know who each other was, but a tiny scheduling program at Pitt had already placed us in the same Software Engineering class.

Alas! It really wasn't that class that initially brought us together, but rather two escapades crossing streams in middle of the street in Oakland, PA. If I hadn't bartended at Fuel-n-Fuddle and Bob wasn't out with his Rugby team, who knows where Software Engineering would have really lead to. But once we hung out, we never stopped. We have almost been inseparable since we first met. I can clearly remember the first 2 weeks of our relationship like it was a couple years ago, not 10!
Thinking back prompted me to create a quick list of the top things that happened in the last decade. I asked Bob the same question over breakfast and he said he hates lists like these because you inevitably leave something out. I have to agree, althought it is nice to stop for a moment or two and just reflect. This may not be the end-all-be-all list of the "aughts" for us, but one thing is for sure... I'm so thankful that I was able to share all of it with Bob!
*** end of decade bonus *** Conception of "Baby Girl Briski"
Also notable throughout the decade was being able to travel to amazing places like Tahiti, Mexico, Spain, Italy, Germany, Carribbean and Hawaii to name a few.... 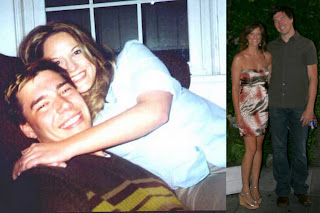 (1st picture ever of us at Pitt Rugby House March 2000 vs 9 1/2 yrs later
a pic of our 3rd wedding anniversary in Santa Barbara Sept 2009)
You may also notice that this list focuses on the positive notes of the last decade. That's not to say there weren't regrets or lows, there were definitely downs and defining moments of sadness like September 11th, Arlene's (Bob's mom's) car accident, Bob shattering his collar bone and the sad fact that we both lost our maternal grandparents (Grandma and Grandpap Smith and Grandma and Grandpap Kovacs).

Overall we view the last decade as a time of fun, experience, growth/maturation, luck and love. We hope at the end of the next decade we will be as lucky and happy as we are now!!
Here's to 2010 and beyond...
Posted by Kari at 9:00 PM