Beam us up Scotty! 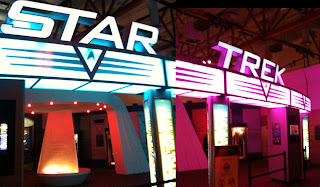 This week while my dad is visiting, we decided to take him to the Star Trek Exhibition at the San Jose Tech Museum. This was NOT a convention, but yes... we did see one person wearing a uniform. Actually before you laugh, on opening night Bob and I were walking around downtown San Jose and saw a couple guys all dressed up and Bob asked me, "are they dressed as Kiss?" and I said " NO! They're Klingons!!!" 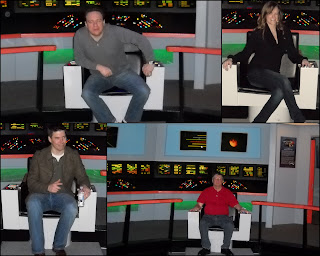 The Exhibition had "scale" replicas of the Enterprise, wardrobe uniforms, a replica of TOS deck, TNG ship corridor, transporter room and even Commander Riker's living quarters. I put scale in quotes because I mean really... a scale of ... what an original starship?? an original model? Hmmmm.
Anyway, there was also a set recreation of the Guardian of Forever... a sort of natural time machine that was in a famous and favorite episode from the original series called "The City on the Edge of Forever".
In this episode Kirk lets the love of his life die so he can fix the space time continuum, which had previously been thrown askew by McCoy. [Warning: this is the only paragraph of geek speak] You see, contacting a civilian within a pre-warp civilization, especially one not from your time, is a direct violation of the Prime Directive. We found this hilarious, because well, you could site many many examples, but in Star Trek IV - the whole movie violates the Prime Directive. I'll digress as to not reveal my complete geekyness. Oh Well - it was still fun to see. 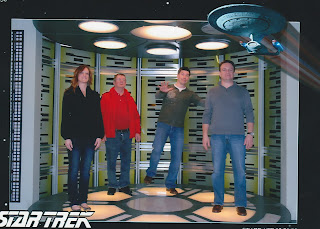 One gripe was that we paid $25/person and then half way through got yelled at for taking pictures (there were no signs and no prior warnings) and were then followed to make sure we didn't take any more. Boo. I could only suppose this was so they could make money on their "professional" staged pictures, which I ended up buying anyway for $28. So all in all we spent $128 (this does not include the ride on the shuttle pod).
One other neat part was the touch table by Microsoft that is programmed with a trivia game on questions about Star Trek. Bob and I dominated over Kenny and Dad - but I have to wonder... did we really win??
Below is a 2 minute video spoof of the pictures we were able to take.
Posted by Kari at 9:32 PM