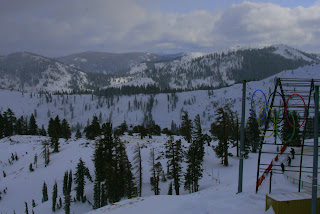 This year marked our 5th pre-Christmas Tahoe trip to Squaw Valley USA. Our 1st trip being when Bob and I were engaged on the slopes! This year it snowed about 80" the week before we arrived and even more creating the largest ski base, right before Christmas, at least since we've started our little tradition. This created the perfect winter wonderland setting, however really bummed me out because I cannot ski this year. :-(

The drive is about a 3-3.5 hours from San Jose to North Lake Tahoe with good weather and light traffic. Funny, while the east coast was getting slammed with snow we leave our sunny, 60 degree weather and drive several hours just to be in the snow!!
The first day after we arrived it was raining at the base and storming with high winds at the top of the mountain, High Camp and half the runs were closed, so Bob decided to do a "spa day" with me instead of skiing.
The bright side of the storm was that the rain later turned to snow and it accumulated about 12" overnight and gave way to clear skies and good skiing conditions for Bob the next day. While Bob skiied, I rode the Cable Car to High Camp and sat at the bar (which has panoramic views of the valley and Lake Tahoe) and worked on my laptop. Bob came in and met me for lunch before I headed back down th

e mountain.
One other celebration happening in 2010 is the 50th anniversary of the Winter Olympic Games at Squaw Valley. In my non-skiing condition, I was able to read up on all the fascinating history. Things like, it dumped 8 feet of snow before the games and everyone predicted the downhill and jumping would be a disaster - but the National Guard were called in from San Francisco and they rode up the new chairlifts, linked arm-in-arm and walked down the mountain packing in the snow! Also, it was the first internationally televised winter olympic games. One other trivia nugget, 1960 at Squaw was the only winter olympics to NOT have the bobsled competition... 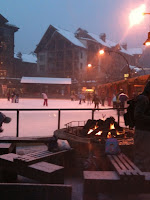 One other nice trip was out 30 mins and over to another ski resort, NorthStar. There they have also built up a nice village of shops with an ice skating rink at the center. Around the rink are firepits and cabanas, a little bar for apre ski cocktails and hot toddy's. There is even live music at one end of the rink. We spent time in the "Chocolate Bar" which specialized in chocolate drinks and desserts (they had about 10 different chocolate martini's.... of course just when I CAN'T have them! ugh.) It started to snow and the whole experience was like right out of a winter wonderland movie.